Our club was invited by the Sarasota Ferrari Driver’s Group to participate in the 4th Annual ‘Exotic Car Festival’ in downtown Lakewood Ranch, FL on February 29. The Model A club was there as well. That Saturday, some 150 cars flooded Main Street, spilling over onto adjacent streets and lots. The list of exotic autos included such marques as Ferrari, Lamborghini, Porsche, McLaren, Jaguar, Rolls Royce, Aston Martin, Bentley and others.

We had 11 member cars, augmented by Bill Stelcher’s Model A Speedster and Bob Tone’s vintage Porsche. The distinctive classic LBC’s and vintage pre-war cars were in nice contrast to the millions of dollars of late model exotics, many of which, quite frankly, look similar.

The weather was beautiful, helping to bring out a crowd estimated in the thousands for this popular event. It was a fun day for car enthusiasts, but more importantly, all proceeds went to The Flight to the North Pole, a charity benefitting terminally ill children in our community. 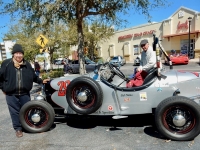 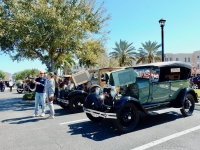 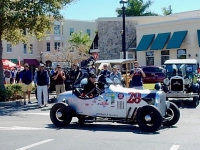