The fourth weekend of October featured two concurrent events in Safety Harbor, Florida. From October 21-24, the national Austin Healey Southeastern Classic was headquartered at the Safety Harbor Resort & Spa. Then, on Saturday, October 23, the Tampa Bay Austin Healey Club held its 34th Annual All British Field Meet and Autojumble. Anchored at one end by the Resort, it extended up eight blocks of Main Street. As SBCC member, John Magine, related, “I have never seen so many beautiful Healeys in one place.”

John further reported: “It was a great show with over 250 cars filling both sides of Main Street. The weather was warm and sunny with hundreds of spectators, dogs and kids. The Tampa Bay club did a super job placing all the cars and coordinating the event. During the awards ceremony in the park, the counting software had a glitch so winners were notified by email later. Other than that issue, it was a great show.”

In past years, our club has had upwards of 10-12 cars entered in the All British Field Meet. Safety Harbor is a manageable hour and a quarter drive north from Sarasota. For a variety of reasons, including the continuing pandemic which forced the cancellation of the event last year, only three of our members participated this time. However, even with fewer numbers, club members were again successful bringing home (or, more accurately, receiving later in the mail) some noteworthy awards. John and Joan Magine got a Second in Class for their 1966 Austin Healy 3000 and Steve and Patti Phillips got a Third for their 1980 MGB.

Thanks to John Magine for the feedback and photos and to Bruce Skaggs for additional input. 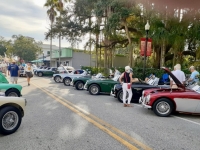 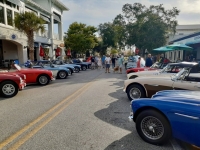 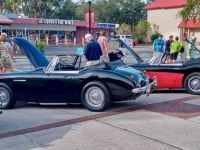 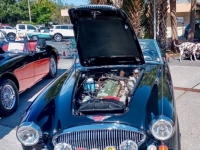 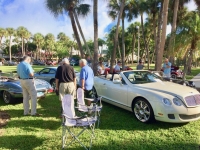 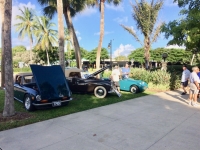 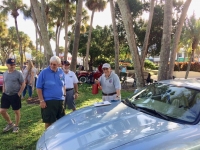 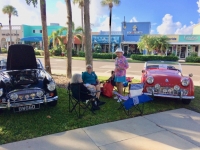 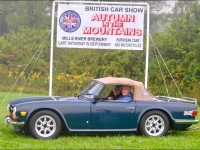 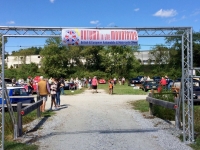 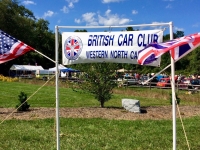 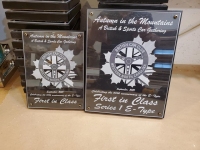 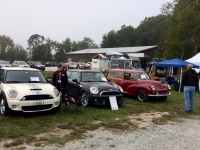 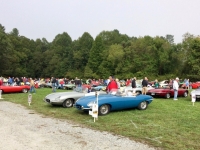 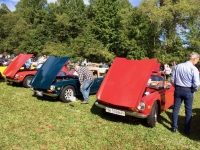 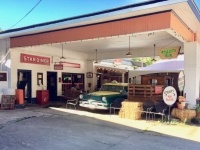 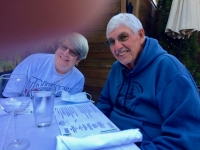 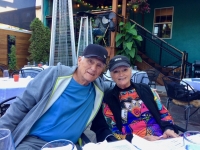 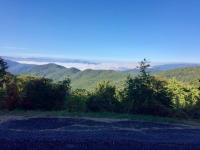 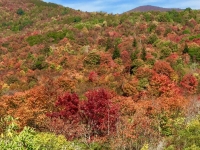 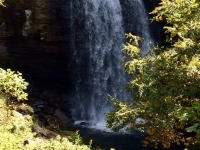 Those Steamy-Rainy-Busy Days of Summer

Fred CookPosted on September 4, 2021 Posted in Events — No Comments ↓

That doesn’t have quite the same ring to it as the lyrics of the great Nat King Cole’s “Lazy-Hazy-Crazy Days of Summer,” but it probably better describes the operational environment of the club this summer. In prior years, the SBCC reduced activities during these months because of the heat and the fact that a significant portion of the membership (snowbirds) retreated to their alternative homes up north. In contrast, this season has featured several of Ex-President for Life, Jim Wilson’s trademark “drive-to’s, bolstered by a booming schedule of Cars & Coffee functions almost every weekend. Thus, members still here who have been anxious to get their LBC out of the garage and put the pandemic in the rearview mirror have had lots of opportunities to do so. Due to the summer weather pattern for late afternoon rain, all of these activities are scheduled in the morning. Here are a few of the highlights:

June 12. Ford’s Garage, a restaurant chain featuring a car theme (duh) opened a franchise near the huge University Town Center (UTC) Mall in Sarasota. They sponsored their first Cars & Coffee on Saturday and over 400 cars showed up!

June 15. Our Club often partners with the Suncoast Antique Automobile Club of America (AACA) for events since many of our members also belong to the AACA. This Saturday we paired up again for a goodwill visit to the Brookdale Palmer Ranch Nursing Home in Sarasota. About 20 cars of different makes and models were present for the residents to look at and reminisce about. It’s not unusual to see residents wistfully talk about the cars of their past. We do this type of event often and it is always rewarding for us car owners.

June 19. And, in fact, the following Saturday, we joined the AACA for visits to two more assisted living facilities. The first was Brookdale Bradenton Gardens and we entertained the residents with a “moving display” by slowly caravanning around the circular driveway. From there, we motored on to Truewood by Merrill in south Bradenton. Here, the management asked that we park our cars so that the residents could come out and actually inspect them. Afterwards, we proceeded to the Oyster Bar on Anna Maria Island for lunch and cold beverages. Thirteen cars from both clubs participated in this event on a very hot day.

June 26. One of the now regular monthly Cars & Coffees is hosted by the BMW dealership in Sarasota. Our Club brought 7 cars, mostly Triumphs and MGs.

June 30. We closed out the busy month with a drive for lunch at the Silver Star Restaurant in Myakka City. Formerly located for years in downtown Sarasota, the Silver Star is a member of that declining species – the family diner. Convoy Commander, Jim Wilson, suffered a dislocated throttle cable about mid-way to our destination. But, with plenty of tools, helping hands and much advice, we were back on our way in a short time. Seven cars started, and finished, the trip.

July 10. The second Cars & Coffee at Ford’s Garage was another resounding success. We had nine cars in attendance.

August 8. Although the weather offered yet another steamy day, Jim organized a drive into the interior on country roads around Myakka City. Thankfully, the route ended at Pinchers Crab Shack at Lakewood Ranch for lunch. We had eight cars and 13 members present.

August 21. The club was well-represented at the popular Gentlemen’s Drivers Club Breakfast at the Paris Bistro in Lakewood Ranch. Held monthly, the organizers arrange to have Main Street blocked off for collector cars to park with breakfast served on the sidewalk. This event is primarily for owners of exotic cars, but our classic LBC’s generally garner the most attention.

August 22. Not satisfied with croissants and other French pastry the day before, on Sunday, Jim organized a great breakfast drive east to Terra Fried Chicken in Arcadia. Despite its questionable branding, this is a very popular breakfast destination.

August 29. On the last Sunday of the month, we did one of our “drives to nowhere” starting and finishing, as usual, at Stottlemyer’s Smokehouse. However, on this occasion we extended the event by having an early BBQ lunch in the large outdoor seating area.

Many thanks to Anita Wood and Bruce Skaggs who helped make this report possible.

The club continued to organize activities throughout the spring months, which was a boon for those of us who felt the need to get out from under the shadow of the pandemic, or maybe, just out from the gloom of the garage.

On March 21, Jim Wilson led one of his spirited drives over about 70 miles of backroads eastward around Arcadia, returning for lunch at Stottlemyer’s BBQ in Sarasota. Ten cars participated in a route that had sharp turns, sweeping curves and exhaust-clearing straightaways. It also included the narrow road pop-up hazards of an oversize citrus truck, motorcycle wolf packs and a pair of sandhill cranes, the latter of which knew they clearly had the right-of-way.

April 18 featured a leisurely drive towards Myakka City and the BellaBlue Berry Farm, which is currently oopen for a U-Pick blueberry season. Seven cars and 14 members took part in this event and it’s reported several members apparently ate more berries than they took home. More and more citrus groves are being converted to blueberry crops as the citrus greening disease continues to ravage Florida. This is BellaBlue Berry Farm’s eighth year in business. For those who still had room, the group stopped for lunch at the Silver Star East Restaurant.

Later in April, a few club members linked up with friends in the Antique Automobile Club of America (AACA) of Sarasota to take part in an AACA tour of central Florida. The excursion included Tommy Small’s “unbelievable collection of everything collectable” and the amazing car collection in the National Parts Depot.

On May 8, there was a drive to one of the Breakfast Drive Club’s favorite haunts, Wheeler’s Cafe in Arcadia. The group included 6 cars and 14 members. Wheeler’s is an “Old Florida-style” restaurant dating back to 1929. According to Bruce, the food’s great, service good, prices cheap and the plumbing outdoors.

May 16 featured an hour’s drive to the NAV-A-GATOR Grill for Sunday lunch. The NAV-A-GATOR is another Old Florida dive. The group had 10 cars with 18 members. The weather cooperated with a lower temperature and less humidity.

Finally, to celebrate “Drive Your British Car Week,” on May 22, a group of 10 cars went on a 50-mile run to Wauchula, Florida and breakfast at Paul’s Kitchen. Paul’s is a noteworthy “local find” off the beaten path, with great service and good food. And, unlike Wheeler’s, the restrooms are in the building!

Whew! Thanks to Bruce Skaggs, Anita Woods and Jim Wilson for input on these events. 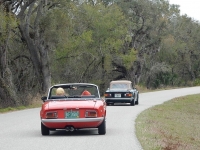 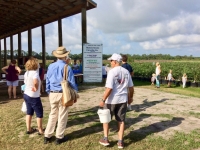 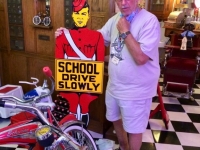 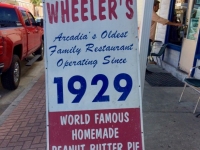 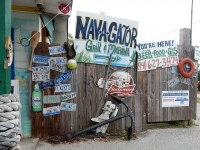 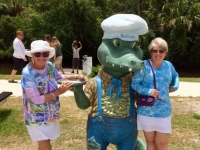 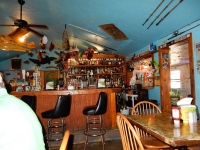