“High Wind Warning. Use Extreme Caution,” presaged the electronic highway sign five miles ahead of the Sunshine Skyway Bridge. Members of the SBCC knew the most direct route to the St. Petersburg Yacht Club Vintage Motor Classic on Nov. 10 was up and over the windy Skyway bridge. It was a brisk early morning drive, with the temperature around 65 degrees, and only a mild breeze rustling the palm fronds at sea level. Then, as the six-car caravan rounded a corner, there it was, the concrete mountain landmark towering over the whitecaps in Tampa Bay. The Sunshine Skyway Bridge is 4.4 miles of cable-stayed bridge, that rises 12 stories above the water.

The Skyway is listed as one of the most spectacular bridges in the world by website DangerousRoads.org. Some drivers enjoy the scenery as they go up and over. Others find it a white-knuckle experience and seek the inside lane. If the wind or weather becomes too severe, the bridge is closed. But not using the bridge requires a journey around Tampa Bay, adding about three hours to the trip. The LBC’s were undaunted by the caution sign, and began the climb. Being small cars, they were all pretty low to the pavement. Toward the summit of the span, the wind picked up noticeably and it was blowing heavily on the other side as they descended.
Leaving the wind behind, the group wove through the quiet Sunday streets of St. Petersburg to the destination. Once at South Straub Park, adjacent to St. Petersburg Yacht Club, Club President Jim Wilson and wife, Debbie, parked their Triumph nearby Wyatt Rinker’s DeLorean. Stuart Keen and friend Bill Swan, with Stu’s MG TD, and John and Joan Magine, with their MGA, were next to each other.
The Vintage Motor Classic has one of the best locations in the area for their annual event. The yacht club and tree shaded park in downtown St. Petersburg are surrounded by the Waterfront Arts District, a big marina, restaurants, hotels and high-rise condos. It’s a popular show and always draws lots of people. Featured were pre-1980 cars, trucks, motorcycles and boats. The weather was beautiful with the temperature rising to 80 degrees.
Hamburgers and hot dogs were grilled on site, but the lure of the numerous nearby cafes and restaurants was hard to ignore. The caliber of cars was outstanding, and for the first time in recent memory, the Suncoast British Car Club didn’t take home any awards. But the show was a pleasant place to spend a Sunday among car enthusiasts and the public. 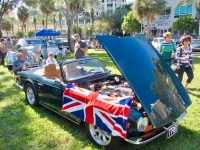 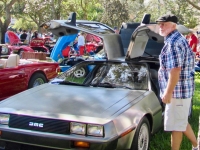