Drivers in Search of Breakfast

Vice-President & Event Coordinator for Life, Jim Wilson, is keeping the club rolling during the dog days of summer. With the target of a restaurant serving breakfast, Jim is leading forays into the interior along myriad country roads with nice S-turns and quiet straightaways. Members may either drive their top-down LBC to experience having their bouffant buffeted by bucolic breezes, or a later model automobile with AC to feel more refreshed upon arrival. The following are just a sampling of recent trips.

May 15. This was considered by Jim to be a catch-up event because, somehow, he must have missed a weekend or two. Bruce Skaggs reported, “(Today), our leader, ol’ lead foot Jim took us on one of his ‘world famous’ back road boogies to Paul’s Kitchen (in Wauchula, FL). Paul’s is one of our favorites since it is an old Florida dive with great food and cheap prices.” And Joe Malaney recorded the following, “Great tour today. My miles door to door were 122. Gas cost $30. I got 19 MPG which isn’t bad considering the spirited speeds we were traveling. I only got to (classified) MPH three or four times.

May 22. The group hit the trail for a fun drive over the great backroads, this time to Wheeler’s Restaurant in Arcadia, FL. Note: Some members also attended the previous day’s monthly breakfast for exotic car owners (including LBC’s) at the Paris Bistrot on Main Street Lakewood Ranch Saturday, May 21.

June 5. A new venue & menu was picked for this Sunday’s breakfast drive – Nicholas’ Family Restaurant in Wauchula. This appeared to be a good choice because Trip Advisor rates the restaurant as #3 out of the 31 eateries in town. Bruce reported that Peter McCann and his wife’s MGB, to get technical, “gave up the ghost about midway.” Thus, it had to be flat-bedded home. Regretfully, it took AAA three hours to rescue him.

June 12. This Sunday’s tour took the intrepid group on back roads around the Myakka area for about 40 minutes ending at the Silver Star East Restaurant in Myakka City. Joe Malaney was with the group once again and reported the day’s cars included a 2005 Lotus, 1973 TR-6, 2007 Mini Cooper S and a 1999 Jaguar XK8.

If you include lunch at the Hob Nob after the May 30 Memorial Day Parade (see previous story) and the May 21 event, that’s six different restaurants in five weeks. Phew! Burp.

Thanks to Bruce Skaggs and Joe Malaney for report input. Joe also sent the photos. 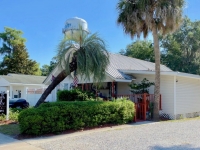 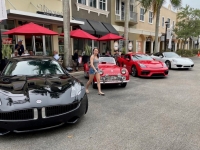 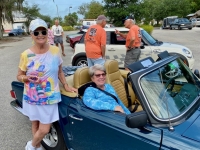 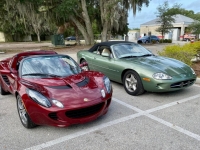 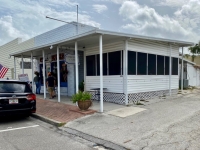 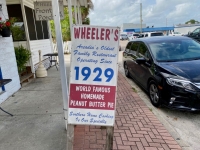 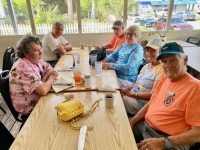 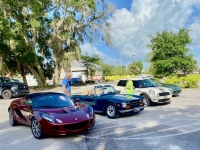 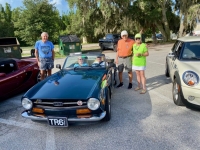 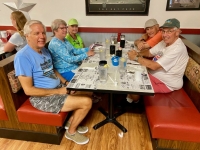