The Sportscar Vintage Racing Association (SVRA) was at Sebring International Raceway February 18-21 for a weekend of racing at the historic flat, 3.7-mile, 17-turn track. The former military airfield has acquired a remarkable motorsports history with just about every legendary series and racing driver passing through. The 12-Hours of Sebring, first held in 1952, is famous around the world. The SVRA’s Sebring SpeedTour routinely draws hundreds of vintage race cars from all eras, makes and models. Many LBC’s were entered in the different competition racing classes.

Saturday, February 20, featured a Hagerty Cars & Caffeine car show open to all classic, vintage, exotic and collectible cars. Participants in the show could also take part in a lap around the track in their show car with the other entrants.

Beginning at Stottlemyer’s Smokehouse (where else?) in Sarasota, Jim Wilson led seven other members of the club in their LBC’s on the trip to participate in the Saturday show, and to watch the vintage races that day. Jim managed to find some of Florida’s best curvy roads for the approximately 80-mile journey. He reported the show as huge, with hundreds of every kind of collector car on displayfrom vintage models to hot rods to new Corvettes. Notably, club members Steve and Patti Phillips won a First in Class for their 1960 MGB!

As for the lap around the famous track, Bruce Skaggs related that, with the huge turnout, the ride was a joke. There were so many cars that wanted a drive on the track he never out of first gear and was riding the clutch most of the way around.  Not to mention the overheating problem that most of us have in our LBC’s at such a slow pace. But, it was a beautiful day and a good time was had by all. 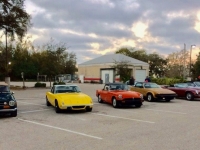 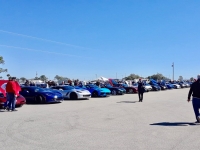 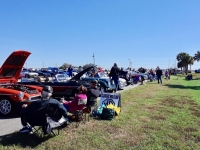 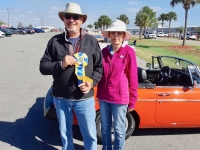