Although much of the state remained in partial shut-down mode over the summer, the club has not been idle. President Jim Wilson has continued to lead stirring “drives to nowhere” so he and other interested club members can blow the dust off the tonneaus and keep the fluids circulating. Alas, while we miss the breakfast and lunch destinations we used to have on these trips, the driving is still a great way to enjoy our cars, not to mention the psychological benefit of just getting out of town. There were four such excursions during the months of July and August.

Joe Malaney had the following to report about the July 19 drive, which was typical: “…Jim led several intrepid motorists from the club on a 100 mile ‘Tour to Nowhere’ on Sunday. We soared through Myakka City, past Solomon’s Castle and across the wooden bridge. Cars participating were Jim’s TR6, 2 MGB’s, 2 Jaguar XK8’s, a Morgan and a Lotus.”

Jim Wilson’s interest in Triumphs began at an early age and he has owned a 1973 TR6 now for 39 years. The origin of this attraction has been captured in the following vignette submitted to The Marque recently by ace corresponding reporter, Bruce Skaggs (This incident has been edited for length and family content.):
“At the ripe old age of 15, Jim got an invitation to a SCCS regional race at Grattan Raceway in Belding, Michigan, about 75 miles from his house. This invite came from one of his older friends who happened to own a Triumph TR4A. His friend, Karl, thought it would be fun to drive the TR to the races with Jim as shotgun. The two spent the day at the track, doing what two teenagers do at such races. As they got ready to return home, Karl turned up deathly ill and unable to drive the 75 miles back. So, Karl told Jim it was up to him to get them home with two caveats, don’t grind the gears and don’t go over 70 mph. With this, Karl went to sleep in the right seat and Jim, with no driver’s license, no experience with either a clutch or a 4-speed and really no knowledge of a Triumph, headed for home. Jim describes this as the defining moment when Triumphs became a part of his inner self.”

Thanks to Joe for the photos from the July 19 drive which accompany this report. 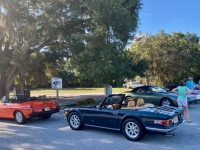 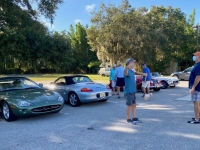