On January 14, the  club welcomed all newcomers (those who joined during the past year) to an SBCC-hosted luncheon at The Jacaranda Trace in Venice, Florida. The meal was preceded by a car show for the enjoyment of the residents of this elegant retirement home. We had 17 cars, the oldest being Bob Faria’s 1930’s era Austin 7, with a few Jag XK’s as the newest. Several rare cars included two Morgans, a Rover, a Healey 100, and a Lotus. There were 34 members in attendance.

As in previous years, a wonderful lunch was served in the Magnolia Room of the Barclay Manor. The meal was accompanied by the usual great service, and everybody had a pleasant, relaxing afternoon. Our newest members, Douglas and Trudy Kniff, were present. Doug is from Michigan and has several British cars, but unfortunately no room yet for any of them here in Florida. Of note, Marie Mainberger and Cindy Douglas took off from work to attend the luncheon. Cindy works for a Sarasota logo company and is helping with producing our new club hats and shirts. The club offers a special thanks to Tom and Shirley Gooding, residents of Jacaranda Trace, for helping organize this event. And finally, thanks to all those who attended and made this a great club occasion. 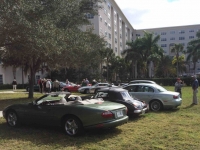 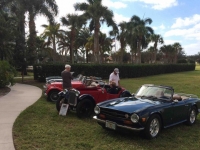 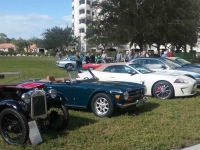